NATURE AND BEAUTY IN THE CENTRAL AMERICAN CARIBBEAN SEA

“The Guna Yala District was created by Law in 1938, and declared a Reserve in 1957, after the Kunas declared independence during the Dule Revolution in February 1925.

The Guna Yala Archipelago (Islas de Guna Yala), is a long and narrow strip of tropical paradise that extends for 5,571 km2 along the Panamanian Caribbean coast, and has 365 small islands with white sand beaches. In total, there are 51 communities, and generally each one is inhabited by a single community, with its own autonomy and leader. The Guna General Congress is the political-administrative body, and is the highest authority of the region. Politically, Guna Yala belongs to the Republic of Panamá, but maintains a certain independence with its own administration and autonomy, and its operation is subject to a special regime, established by the law and statutes of the region.

Guna Yala has many natural and cultural attractions that offer visitors an impressive variety of attractions such as its beautiful beaches, ecotourism, traditional cultural tourism, adventure tourism, hiking, bird watching and sea kayaking, among others. All this, together with the traditional culture that the Gunas still maintain, makes it undoubtedly one of the most exciting tourist destinations that Panamá has to offer the world.

You can access the Islands of Guna Yala by sea, air or land. Air Panama flies from Albrook airport to the five airstrips that exist in the region. It can also be reached by sea along the entire coast above Colon, or go by land to the town of Miramar, where you take a boat to the island of Gaigirgordub, capital of the Comarca Guna Yala. It is recommended to travel to this area during the rainy season due to the tide. If you want to travel by land, currently the way most visitors and locals do it, take the Llano-Carti road for 42 kilometers through the Nusagandi Protected Wild Area of the Guna Region.”

On this tour, you will visit the most important Mayan remains of Central America: Joya de Cerén, Tazumal, Casablanca, Copán, and Quiriguá. 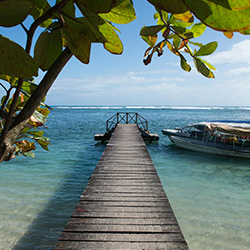 Relaxation and culture in Central America

Move across the streets of La Antigua Guatemala, take the Route of the Flowers, and visit Joya de Cerén and Copán, through this 9-day tour.

On this trip through three Central American countries, you will visit the most impressive Mayan ruins, the best natural resources, and their colonial cities.